The No Fear Speaking Online Video Course contains over 28 informative and inspiring videos of instruction and directions featuring the best-selling author and coach Joe Yazbeck. Joe will personally guide you in study at your own pace, anywhere you have an Internet connection - home, office or while traveling - directly from your computer or mobile device. These well-constructed 5-7 minute lessons are easy to understand and apply and include exercises to improve your skill at preparing, organizing and confidently delivering a dynamic presentation. You will also be able to download the electronic versions of Joe's best-selling book No Fear Speaking and the speakers Quick Reference Guide which are included in the training program. 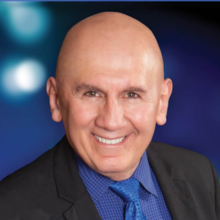 Joe Yazbeck is the Founder, President and CEO of Prestige Leadership Advisors whose mission is to facilitate leaders in becoming dynamic powerful communicators so they can significantly influence the world around them.Working with heads of state to leaders of major corporations, high-ranking military officers, and political candidates to best-selling authors, Joe Yazbeck is a highly sought after leadership and communications coach.  Government and business leaders around the globe seek his counsel and company’s services at critical times on topics such as public relations,  strategic direction, media training when launching a new brand, influencing board members, speaking to government committees, winning a political campaign, creating a successful exit strategy or recovering from a loss of confidence.The No Fear Speaking System for Leaders, Executives, Entrepreneurs and the WorkforceJoe created the internationally successful No Fear Speaking System offering a host of communications services including executive level speaker training, negotiation skills, media presentations for radio and television, sales presentations, and courtroom/trial presentations. Joe has also authored a #1 Amazon best-selling companion book for this system, No Fear Speaking: High Impact Public Speaking Secrets to Inspire and Influence Any Audience. Joe teaches these very special leadership communications skills globally to an international fan base at conventions, events, conferences, and instructor led workshops, inspiring attendees to achieve greatness in their own life and careers.No Fear Speaking is available in English, Russian, Slovak, German, Spanish, Hungarian, Czech and Chinese.
Enroll Free
We suggest moving this party over to a full size window.
You'll enjoy it way more.
Close
Go Fullscreen